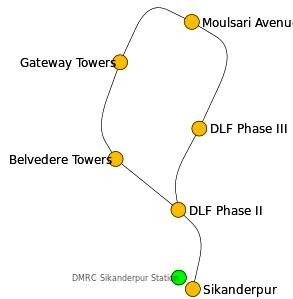 Rapid Metro Rail is now working on two phases. First phase is covering distance of little 5 KM is likely to be announced in short time. Metro route is designed as per the convenience of passengers and make it reachable to most peoples.

The first phase will have touches six station –

The interchange station is at Sikanderpur from which rapid metro connects Delhi Metro via skywalk station. This will provide a connection DLF cyber city to Delhi. Rapid metro is also a time saver option for those peoples have to travel between Delhi to Gurgaon for their job or business purpose.

Second phase of rapid metro is approved by Haryana cabinet on 2008. IL&FS transportation network limited and its subsidiary takes the charge. The second phase is extended sikanderpur to sector 56 gurgaon. There are 6 stations on the extension and the total journey time is set 18 minutes. The total distance covers 6.5 KM in only 18 minutes. Land for project will be provided by HUDA. Rapid metro phase II will be double tracked while the remaining stations served single track. There are phase III metro project in also on process for approval. It is extention of phase I and phase ii.

The rapid metro project is India’s first private financed metro. Phase I project is shortly open for public. The will planned route for rapid metro rail will run and operate under DMRC’s. Gurgaon metro rail follow the standard Gauge which is the most comfortable and internationally accepted system to running a metro rail. With the advantage of rapid metro commuters get a relief from traffic problems by connects them NH-8, Gurgaon and Delhi. It’s estimated that through this rapid metro project traffic will reduce approximately 30%. It is the best example of public private partnership model.